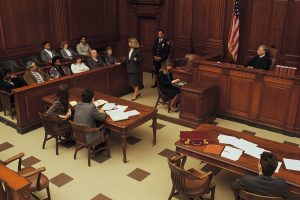 This is the next article in my series on the handling of domestic violence charges in Long Island, New York. My last article discussed the possibility claiming self-defense against a domestic violence charge. It is important to understand that the police will sometimes arrest a party, who was simply defending themselves, out of a mistaken belief that such a party was the “primary aggressor.” If you or a loved one have been arrested, for defending themselves, then it is vital you speak with a criminal defense lawyer immediately. In this article I will discuss what to expect from the trial process. Contact my office today to speak with an attorney.

If the defendant is charged with a misdemeanor (which is the case is most domestic violence matters) then the case will be decided at a bench trial. This means that there will be no jury and that the judge will decide the issue of guilt or innocence. If the accused is charged with a felony, then the matter will be presided over by a judge and decided by a jury. Felony matters will begin with jury selection. After the jury has been selected, then the matter will proceed to opening statements. In a bench trial, the opening statements will be the first step of the process. Opening statements are not a time for argument, instead it is a time for the attorneys to state what they expect the evidence to show and how the decider of fact will be asked to rule in the matter.

The prosecution will present their case after opening statements have been concluded. The prosecution’s case will typically consist of testimony from the victim, testimony from arresting officers, the viewing of relevant photos (such as those depicting injuries to the victim), etc. The defense will present its case once the defense has concluded. The defense will then follow with “rebuttal” evidence. It is important to understand that rebuttal is not a time to raise new arguments; rebuttal may only be used to directly address claims which were made by the defense. Once rebuttal has been concluded then each side will make their closing arguments. The decider of fact (whether it is the judge or a jury) will then deliberate and decide the issue of guilt or innocence. If the defendant is acquitted then the matter is over. If the defendant is found guilty then the Court will set a date for sentencing.

I cannot stress enough the fact that you should retain an experienced criminal defense attorney if you have been charged with domestic violence. No two cases are the same and your strategy for trial will depend on the specific facts of your matter. The rules of evidence and procedure will be strictly enforced and, if these rules are not followed, then you may possibly lose the ability to present necessary evidence. As a former public defender, I am able to assist with such matters. Contact my office today to speak with a Long Island lawyer. My office also serves Kings County residents in Brooklyn, residents of Queens, those in Nassau and Suffolk Counties, as well as people in other New York areas.